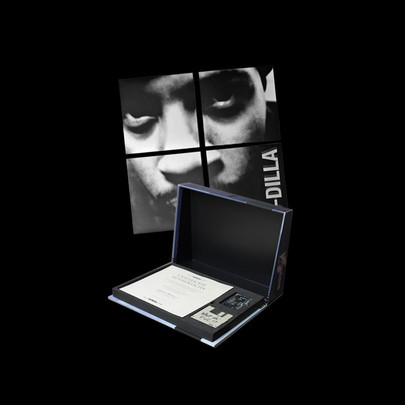 Jay Dee a.k.a. J Dilla is widely regarded as one of the greatest producers in hip hop history. ‘The King of Beats’ Ma Dukes Yancey Collector’s Edition is manufactured in the image and likeness of the exact SP-1200 which produced Jay Dee’s signature sound. The box casing is hand crafted from custom wood with chrome hinges.

Available for the first time, ‘The King of Beats’ Box Set feature’s (40) tracks from Jay Dee’s groundbreaking ‘Batches’ on vinyl.

The E-Mu Systems SP-1200 drum machine and sampler was the first electronic instrument Jay Dee worked with while crafting the incomparable styles and sounds which defined the early stages of his legendary production. The SP-1200 was his primary tool of choice at the inception of his career. During this period, he created classics for early Slum Village, The Pharcyde, A Tribe Called Quest, Busta Rhymes, among many others.

After careful study and curation this one of a kind collection compiles the well-deserved documentation of Jay Dee’s early musical masterpieces. Ma Dukes assembled a team of industry family who spent nine months working daily to bring this project to J Dilla fans everywhere.

Young RJ show the “J Dilla The King of Beats Box Set” items and how it works after the jump.