Paul Crouch, founder of the Trinity Broadcasting Network, the world’s largest Christian television network, always had a knack for avoiding scandal, brushing off allegations of graft and sexual harassment with ease. However, the televangelists’ FBI file, released after his death, reveals that his criminal ties potentially go a lot deeper – and weirder – than anybody could have imagined.

Requested by long-time MuckRock user RobbyD, the file reveals the laundry list of Crouch’s activities the FBI was monitoring or even investigating. Though the file is heavily redacted, it’s intact enough to describe the FBI’s investigations into some of his exploits, whose findings are mostly based on a host of phone calls to and from Trinity Broadcasting Network with some pretty sketchy players.

Investigation by the Italian IRS

The first 20 or so pages of the Crouch document make it clear that the FBI and IRS were working closely with the Italian GDF, essentially their Internal Revenue Service, to fully investigate Crouch’s foreign and domestic holdings. According to the file, the FBI and GDF found that, among other things, CHLC, an apparent subsidiary of TBN, was conducting a false financial statements scam they called “pre-billing,” where in order to continue receiving loan money the organization would submit receipts for completed sales that were actually still a “work in progress, with no amount being due from the customer as of the date of the collateral report.”

A CHLC employee confirmed that such practices were occurring. (Screenshot) The Italian side of the investigation ended up centering on TBN’s potential violation of the Italian Mammi law, which according to the document prohibits foreign ownership of broadcasting companies in Italy. In addition, the GDF said it “believes the company maybe be acting as a front for foreign investors,” referring to TBN. 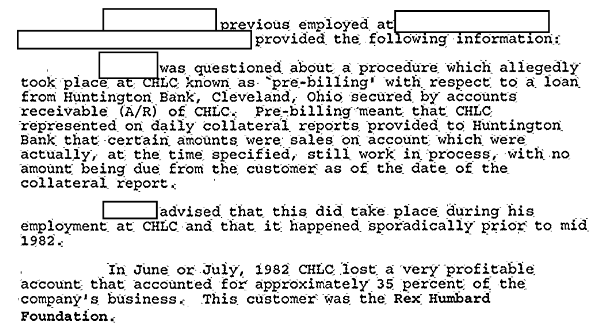 The Italian Mob in NY

Apparently as soon as word got out that Crouch and TBN were in the money laundering biz, the Italian mob decided they wanted in. The file mentions phone contact between TBN and the Sons of Italy Lodge in the Bronx, NY. You might be thinking that this is pretty shaky evidence to suggest Crouch was in contact with the mob, but considering the fact that the phone record was included in a subsection of the infamous Bronx mobster Vincent “Chin” Gigante’s FBI file, it’s pretty clear that the FBI was drawing some kind of connection. This probably didn’t make the GDF too happy either.

As part of the FBI’s joint investigation with the GDF and IRS, the FBI dug up an older investigation into reports that Crouch, along with others, had been working with the Palestinian Liberation Organization, receiving funds to “run guns” to the organization. The reports accuse Crouch and his partners as being motivated by “anti-semitic and white supremacist,” beliefs.

On the next page, the same investigation identified Trinity Broadcasting Network’s number in a call with the Islamic Education Center based in Baltimore.  Later the document explains that FBI Los Angeles investigated crouch for the allegations, but dropped the case once they officially determined he was a religious leader.

Yep, that’s in there too. Numerous sections of the document mention TBN’s phone communications with an unnamed agent who was “recruited by the East German Intelligence Service.” The file later describes that the man believed to have been recruited by East Germany was a New York attorney who called TBN repeatedly between April and September of 1986.

Other sketchy phone calls that went in and out of TBN over the years were from a Hungarian computer programmer whom TBN sponsored for U.S. citizenship, and phone calls from a number in Omaha to the TBN line which were documented in a separate FBI narcotics transfer investigation. Maybe someday all those little white redactions will be peeled away and we’ll know exactly what Crouch was up to.