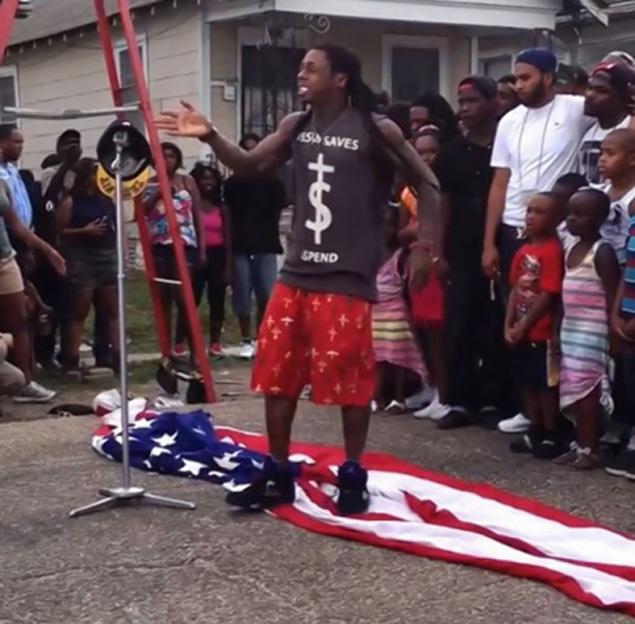 Lil Wayne has hit back at the backlash he has received for stepping on an American flag while shooting his new music video, claiming he didn’t walk all over the stars and stripes “on purpose.”

Weezy was filming the video to accompany his new single ‘God Bless Amerika,’ which features on his latest album ‘I Am Not A Human Being II,’ in New Orleans over the weekend.

However, the hip-hop star caused outrage when a large American flag which was hanging behind him suddenly fell and rather than step away from it, Lil Wayne continued to rap his verse to the camera while walking back and forth.

Hours after the footage surfaced online , Lil Wayne finally responded to the intense criticism and tweeted an explanation.

“I didn’t step on the flag on purpose! It’s a scene in a video where the flag drops behind me and after it drop it’s just there as I perform,” the rapper said.

Those who were offended by Weezy’s actions took to their Twitter in droves to blast the star, including Mixed Martial Arts  fighter Tim Kennedy who challenged the rapper to a fight, saying: “I would do almost anything to fight Lil Wayne.”

“All Americans should treat (the flag) with respect,” said John Raughter, an American Legion spokesman speaking generally about the flag and who admitted he had yet to see the clip. “It is the American flag that is draped across the coffins of our fallen heroes when they come back from war. In fact, any veteran can have a flag on their coffin. As such, it’s entitled to the highest respect.”