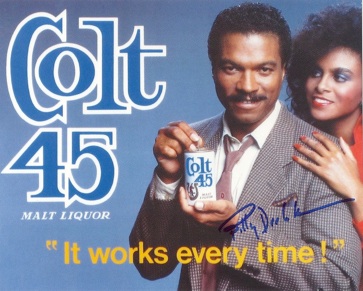 Drinking spirits is as old as civilization itself. It’s elements are harvested from the soil we walk upon and a process made famous by the Egyptians and even Jesus Himself. Humans have made liquor a part of everything in their lives from family dinners, parties,sporting events,and death. Our love affair with the colored fermentation has left Blacks as its biggest consumer courtesy of BATF(Bureau of Alcohol, Tobacco and Firearms) and the Pabst Brewing Company originally advertised to White middle class consumers. Pabst, the wonderful  makers who brought you Old English 800,St. Ides, Schlitz Malt Liquor, and Colt 45 to name a few.

The prestigious and award winning company founded in 1844, became more popular in Black communities once businesses recognized the profit margin after the civil rights movement; due to their proximity to people with meager or zero wages. One of the early adopters of Field Marketing, Pabst became  more popular in the hood in the 80’s with Hollywood icon and sex symbol  Billy Dee Williams as its spokesperson. Colt 45 would use Williams in numerous print,billboard,and television ads over the years and audaciously parodied himself as Gen. Warren Boutwell in Undercover Brother starring Eddie Griffin. 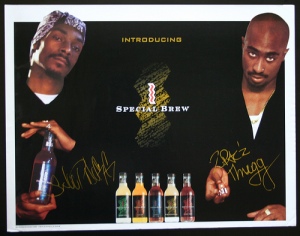 In the 90’s during Gangsta Rap’s heyday, Colt 45 revised their marketing campaign by targeting and exploiting the hip-hop community by employing  Cube,Pac,Biggie, and Snoop due to their broad appeal. In 1991, socially conscious frontman Chuck D of Public Enemy filed a $5 million dollar lawsuit claiming copyright infringement and violation of his publicity rights over a radio ad sampling his voice. The suit was later dropped after St. Ides removed the ads from radio stations in New York and Los Angeles.

Fast forward into the 21st century and America’s favorite gangster(Snoop) is back peddling their latest concoction called Blast to  intoxicate the masses. Pabst Brewing, the U.S.’s third largest brewer is the home to over 25 brands and unfortunately responsible for the millions of health related issues and death attributed to the cheap brown stuff. It’s toxic ingredients are the liquid oasis for many souls;clutching pilfered coins from underneath dirty couch cushions to purchase the bottled residue.

With the recent controversy surrounding Four Loko, Colt 45’s marketing strategy is a glimpse into racist corporate mindset in America. The bigotry of these corporate juggernauts are designed to tear families apart and destroy vital organs. It’s sludge became a fixture throughout my youth as we guzzled our troubles away in a brown paper bag. As a young bloke, I didn’t understand the damage that malt liquor would incur until it affected my own health. And judging by the video, it appears Colt 45 will be shipped to a local bodega or liquor store near you very soon.

I fondly remember Caine dropping  his 40 after O-Dog clapped that Korean in Menace to Society and Dough Boy(Ice Cube) washing down a St. Ides(product placement anyone?) in Boyz in the Hood slappin’ bones. However,I wonder will Snoop reconsider his contract after losing one of his closest friends? My years of binge drinking led to high blood pressure that has dramatically altered my lifestyle. I stopped drinking malt liquor a long time ago and it’s obvious that Colt 45 has revamped their image in order to cater to a whole new generation with bold new packaging and a new “Billy Dee” starring Snoop D.O. Double G.The question is how many kidney and liver failures will it take to put a $300 million dollar company out of business in the Black community? The answer is none. ” The Power of Colt 45. It works every time”. Gee, thanks Snoop I’ll just stick to drinking  red wine. 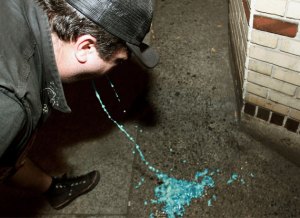